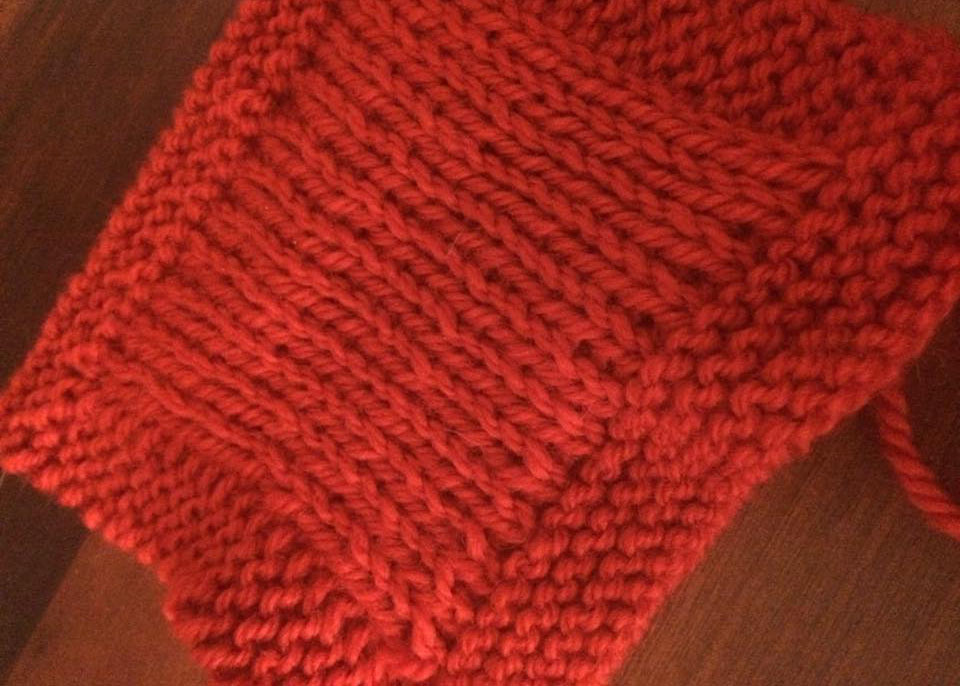 In the Kitchen, Knitting

A Kettle Holder in Double Knitting (The Workwoman’s Guide, 1840)

In the Living History Knits (and Crochets!) group on Facebook, there’s a call for a few period-correct patterns friendly to beginning knitters. Though you can’t get any more beginner-friendly than basic garter stitch (what’s known as plain knitting in the mid-19th century), I was asked to translate a kettle holder in double knitting. Happily, double knitting is almost just as easy!

Here’s a quick photo of the project (a better photograph will come later, sans cheatery Dutch angle to disguise the mess around it): 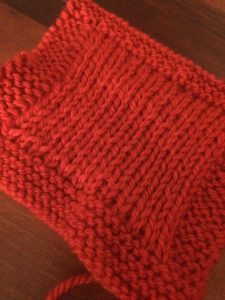 This is knit in double knitting, with a border of plain ribs round.

When the double part is quite square, add the four ribs of plain knitting, to complete the border, and fasten off. A little loop of twisted wool is put at the top to hang it by.

Double knitting is really neat, because it’s a very simple way to get a thick bit of stitching which will insulate you well from heat or cold.

Here it is, presented by Studio Knit on YouTube:

The pattern doesn’t specify what type of wool yarn is used, or the size of the needles. I used worsted weight, as I had it on hand, and found it suitable to the task. I chose a US Size 5 needle (3.75 mm, UK 9). Wool is important for a kettle holder, as it takes heat well.

You’ll find most period projects use a thinner yarn, but most modern stores carry worsted. O! what to do with that worsted-weight wool you just couldn’t pass up? I find this sort of project an excellent choice.

Cast On. Cast on 32 stitches. (I’ve found both the loop cast on (YouTube) and knitting on (also YouTube) in period knitting manuals. It’s late now and I’m quite tired, but I will document these in another post.) If you knit on, you may count this as your first row.

Rows 1–8. What are ribs? As far as I could tell in reading period manuals, a rib is two rows (a row is one needle-length, all the way to the end). To knit four ribs, knit eight rows.

Row 9 & Beyond.  Knit 4 stitches. Now, we’re going to start double knitting! Knit 1, move your yarn to the front as if to purl, and slip 1. Move the yarn back behind your needles. Repeat until you have four stitches left. Knit the remaining 4 stitches plain.

Keep going! Knit each row like Row 9 until the center, in double knitting, looks square. You’ve got to eyeball it (welcome to Victorian knitting!) but mine was around 34 rows of double knitting (you will count 17 “v” knit stitches on one side).

Final 8 Rows. Once your double knitting is square, knit the final 8 rows to complete your border.

Cast Off. So far, I’ve only read about this basic bind off in the manuals.  It doesn’t mean that’s the only one ever used, but it was sure the easiest to describe in writing!

And that’s it! You can add a little bit of wool to one corner to hang it; sometimes I use the leftover yarn from casting on or off so I don’t have to sew it in.